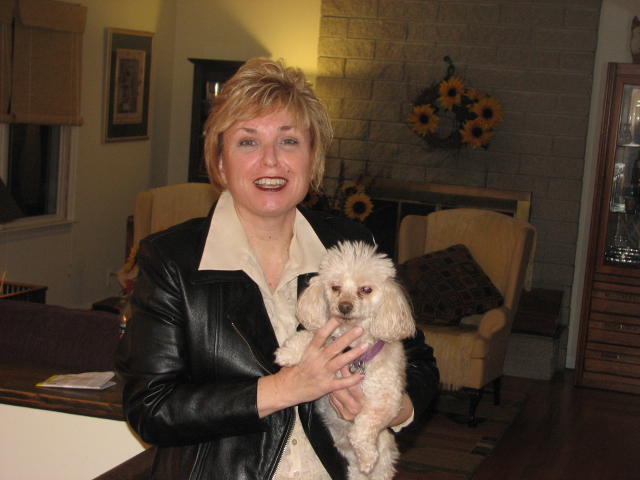 Last week in my mind I scheduled an appointment on Thursday for my beloved French poodle Crouton to be euthanized. His tumor bled. He did not eat. He threw up. I was distraught.  Loving him so deeply for the last 10 years of his life, Crouton’s eventual demise was a poisonous thought that I allowed into my mind on very limited occasions.

The week was full of lots of emotional unrest; I realized that this was a first for me. Thirteen years ago, my dad died in my arms after a long battle of emphysema at the hospital, then a couple of years later I lost my brother to a stroke, but I never had to deal with a pet’s death before. The last time I lost a pet was an old cat Rocky about 26 years ago. During my earlier years, I was spared by my father who had the task at hand to put down my cats.

‘I’d take it a second at a time. I’d take it as it unfolded,” I told myself while daunting images of Crouton’s sad eyes magnifying into my heart as if to ask ‘why mommy, why are you forsaking me?’ shot through my consciousness like inescapable darts.

Through thick and thin, through lots of comings and goings and lots of changes, over these last ten years, Crouton never changed. Not in appearance and not in companionship. At the end stretch of my marriage, on one of the last nights that my then husband and I would share the same house, my then husband brought Crouton into the bedroom, and handed him to me.

“Why don’t you take him to bed with you tonight?”

“I will,” I replied, knowing that the sad truth was, I preferred Crouton’s company above his; and, admittedly, Crouton was my preferred companion over many other people in my life and sometimes, yes, even over the kids on a few difficult occasions. Everyone did wrong; I would joke, but never Crouton. When my world rotated off the axis, Crouton symbolized my safety net.

He was my Velcro. Ever mindful of falling over him, he was like my third shoe. He knew me more intimately than any human. He never abandoned me the times I spent bawling behind closed doors in my office or bedroom. Through good and bad and the rainbow of life in between, he was my stronghold. I always thought, if I took him on a boat and threw myself overboard, he would wait until I reappeared…or die waiting. As far as I am concerned, a human can’t hold a candle to a dog’s loyalty.

On the other side of the dog bone, I mean coin, to Crouton, I represented his pork chop as I sometimes joked about his love towards me. He was totally dependent on me for his livelihood. Feeding, walking, trips to the vet and the salon, coordinating alternative travel arrangements when I hit the road, nuisances these responsibilities were sometimes, but the motivation behind these acts was one hundred percent unconditional love; and, in return, I got so much more.

Whether a long day or a short hour, whenever I came home, it was a bang of a celebration. Crouton maintained his usual welcome: jubilant, barking, and twisting around me. He puffed up my ego bigger than Alaska and California, bigger than outer space, because every day in Crouton’s eyes, I could do no wrong in his world either. I was his prized pork chop, and as far as he was concerned, that was the only Academy Award to achieve that mattered. To grieve so intensely last week made sense.

Oddly enough, right after my dearest friend Pat said, “He’s a tough dog,” while she was dog sitting Crouton last week, he rallied. He ate! He took a short walk! And, thankfully, in my mind I nixed the vet’s Thursday appointment. It was a miracle I announced to my friend Anne at church this past Sunday, a miracle! Crouton would live, and everything would be back to normal.

Here we are a week later; Crouton has again stopped eating. He throws up and has withered away so suddenly. His breathing is labored. He has given up, as if saying, “It’s time, mommy.  We can do this, peacefully.”

Somehow those miracle days of him rallying grounded me. I am able to exhale normally again. And between not accepting Crouton’s impending death, fighting and resisting, I am at the stage of acceptance. Earlier tonight with no one home, we had our alone time. I cradled him in my arms and just wept, begging, crying, “Please don’t go. Please don’t go.”

Then I realized, Crouton, while we forged ahead, the dog that we used to call the “dancing dog” had lost his bop, hop and boogie spirit very, very slowly. Since August 16, 2013 when the doctor diagnosed his tumor, he faded like summer’s end into fall.  I know in total faith his season has arrived.

My tears diminished. The dog that lay in my arms was just a coat, emptied, worn down of each beautiful fiber.  The moment marked a span of forty seasons that began when we rescued a poodle, and he rescued us by dancing into our lives, making each step worth the effort.

“It’s time, Crouton. We can do this, peacefully,” I whispered.

10 thoughts on “And the seasons go round and round….”

Micro of the Macro

Recognizing & appreciating our oneness with Nature

Our Right To Write

Connect your nature with the planet’s

Into the Light Adventures

The Essence of you

Travel | Explore | And Many More!

In Pursuit of My First Love

Returning to the First Love

From the Inside Out

The daily life of an addict in recovery